What Does British Airways Have to Offer Missionaries?

Today, an airline is an airline. Gone are the days of airlines trying to impress passengers with excellent meals, great service and perks to keep you flying! While this is true in general, each airline has held onto a few of their "perks" and British Airways has retained a few which we think our Missionary families might be interested.

Delayed Ticketing:
British Airways understands that missionaries have to "raise" support from individuals and other sources and they realize that this can often be a long process. They also understand that you need to book/reserve your ticket when prices are cheap. So, British Airways allows a few travel agents, like World Missions Travel, to reserve special "Missionary Contract Fares" for missionaries and we can hold them for several weeks while you organize the funds to pay for the tickets.

FREE Checked Baggage:
If traveling on a British Airways Missionary Contract from a gateway city in the USA (Dallas, Los Angeles, Chicago, Washington, New York, Miami, Houston, etc.), then each missionary is entitled to 3 FREE checked pieces of luggage at no additional cost!

FREE Date Change:
Often missionaries find themselves needing to change dates. Whether it was that terrible food you ate on the mission field which caused you to get so sick that you needed to go home early or whether those orphans just stole your heart and you want to stay a little longer, British Airways wants to help make those ticket changes possible! BA will allow one free date change as long as the same class of service is available. If the same class of service is available (and no we do not mean any economy seat, we mean the same price structure seat) then your ticket can be changed for free!

Household Mileage Accounts:
Frequent flier mileage accounts are great ways to earn you and your family free travel. However, let's face it...if the average missionary travels once a year (or less), it will take forever for you to earn enough mileage for that free ticket. British Airways is a little different. While each member of your family (including the kids) has their own mileage account, the head of household can invite everyone living at the same address to join the "Household Account." This pooling of miles allows you to pull miles from any family members individual account and add to another account in order to reach a free ticket faster! Unlike other airlines, British Airways does NOT charge for the mileage transfer if it is from within the household account. Check out the BA Household Account Website for more details.

On Business - Corporate Account for Non-Profit Organizations:
For missionaries who have started their own non-profit organizations, this will be of significant interest to you. When you, your family or short term mission team members travel, they can all earn miles for the ministry! British Airways has a program called On Business which allows small businesses and non-profits to earn "corporate points" towards free travel. Each individual is still allowed to earn their own personal mileage, but then based on the distance they travel, they earn the organization points. These points, added together create the On Business account and allows the organization to get free tickets from the travel of its staff and volunteers.

So, consider using British Airways next time you travel to Europe or Africa on a mission trip!
Posted by Andrew Kelly at 9:23 AM 19 comments:

How to Get ALL that Stuff Back to the Mission Field...

As a missionary, one of the things we do, each time we are on furlough, is to head to Wal-Mart, Target and other places to stock up on all the "essentials" which we cannot find on the mission field. This is a cumbersome challenge, but one that is necessary, especially if you have children.

When we pack to return to the mission field, our excess luggage includes clothing for the kids for the next X months or years. It also includes things like brown sugar, vanilla, crisco and more!

The usual question is "How do we pack all this?" and "What do we pack it in?"

Over the years, we have discovered that suitcases are expensive and take up space in our small home. Duffle bags are cheap, but they are also flimsy and can't be used over and over. Boxes create lots of questions in customs. So, what does one use?

FOOT LOCKERS! Yes, the plastic foot lockers which can be found at stores like Wal-Mart and Academy Sporting Goods are perfect for luggage. They are lockable (with locks or zip ties), fit within the airline dimensions and stack easily on luggage carts! Not to mention, once home, you have perfectly good storage containers for things that does have a home elsewhere. 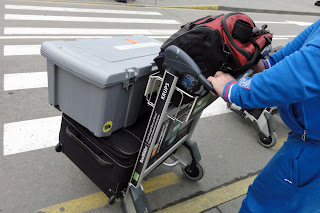 So, next time you are traveling and trying to pack it all up...consider grabing a foot locker or two!
Posted by Andrew Kelly at 11:29 AM 1 comment:

London Layover on a Missionary Budget...

As a missionary, I know what many people think when looking for airline tickets..."I want to most direct route that does not have a layover in some foreign city. That is just MORE money." This is true, our support dollars are precious and the expense of overnighting in London (or elsewhere) is often not worth the cheaper ticket. So, I decided to figure out the cheapest way to do layover in London on a missionary budget.

So to minimalize the expenses, here are my recommendations:

1) Baggage - make sure that you have less than 22 hours laying over in London. If you are less than that, British Airways will allow you to check your bags at your departure city all the way through to your destination city. With this, you have no bags to have to worry about lugging around or storing at the airport. The airlines take care of that for you!

2) Hotel - this is the biggest expense in London. Where to stay at a cheap price and decent quality. As a missionary, I hear college interns and short term missionaries often say they will stay at a hostel, etc. in the city and if it isn't clean, etc. it does not matter because it is just one night. Between the cheap (often less quality hostel) and the transportation cost to get into the city, one ends up spending about $50 or more a night. So, here is my recommendation...go online to www.priceline.com and BID on a 4 star hotel room near Heathrow airport. Missionaries do deserve some pampering from time to time, so BID on a NICE hotel. If you BID for a 4 star room at about $75 US a night, you will often get the Sheraton Heathrow or the Crown Plaza Heathrow. Both are very nice hotels and you will get a good nights sleep near the airport for a cheap price (generally both of those hotels go for about $200 a night).

3) Transport - Once you arrange a place to stay, the cheapest mode of transport is the Hotel Hoppa bus that leaves from the airport every 30 minutes. The cost is 5 British Pounds each direction.  If you want to go even cheaper, you can take one of the regular London buses for a pound or two, but you may wait an hour or so for the bus to arrive at the airport.

If you want to go to Windsor (where the castle is located), you can take bus #77 from bus stop 9 just outside the door to Terminal 5 at Heathrow. The bus takes 40 minutes each direction and costs 5 British Pounds.

4) Eating - Eating at airports or hotels is always going to cost a lot. However, there are ways to make it cheaper. As you exit the arrivals doors at Terminal 5, there are a couple of cheaper eating options. For breakfast the next morning, don't spend money at the hotel. Go to the south end of Terminal 5 Arrivals hall and buy a couple of Krispy Kreme donuts to take with you to the hotel, or go to the north end to M&S Simply Food grocery story and buy some yogurt, fruit, cereal, milk, etc. All hotels have tea and coffee available in your room. For dinner on the evening you arrive, stop by M&S Simply Food and buy a salad (usually around 3 British Pounds) and a Fruit Tray (also about 3 British Pounds). A healthy simple dinner!

Hopefully, this will help you with your short layover at the Heathrow Airport. If you have any specific questions, ask them in the comment section below and I will try to answer them.

Please read below for a message which we have received from British Airways...
Agents - Please note that for any BA bookings, where travel falls between 16JUL-29AUG, we will not be able to hold space more than 72 hours due to the anticipated increase in Olympic travelers. Please advise all clients that if they are holding reservations during these dates, they need to proceed with ticketing or reservations could possibly auto-cancel.
Posted by Andrew Kelly at 3:47 AM 8 comments:

Our Agents Are Available 24 Hours a Day!

These days, internet travel bookings are so easy to make. With websites dedicated to pulling all airlines and fares together and showing you a comparison of prices and schedules, it has become the fashionable thing to purchase airline tickets online. However, what many travelers do not realize is that once that ticket is issued, if any problems arise, there is no one to help!
Here is a great article from CNN that makes a case for travel agents.
http://www.cnn.com/2012/01/30/travel/travel-agent-evolution/index.html?hpt=tr_bn3
Our Travel Consultants at World Missions Travel are here for you anytime you need us. With 5 Consultants on two different continents, one of us is working at any given time during the 24 hour day!
Posted by Andrew Kelly at 3:50 AM 1 comment:

The Case for Travel Agents...

I often quote airline prices and find that clients end up booking online. That is fine! However, the problem generally arises when something happens and those same clients are in a panic and call and beg that we help them. Problem is, if we don't make the reservation and issue the ticket, we cannot help as we have no access to the ticket record.
Read this great article from CNN that proves the case for travel agents!
http://www.cnn.com/2012/01/30/travel/travel-agent-evolution/index.html?hpt=tr_bn3
Posted by Andrew Kelly at 1:52 PM 2 comments:

Our mission is to assist you with travel solutions and provide customer service that will make your trip a memorable one. We recognize that travel budgets have become more strained today, and we are dedicated to offering you high value airfares without compromise of service.
Rosann Alexander:
rosannalexander@live.com
Andrew Kelly:
akellyukraine@gmail.com